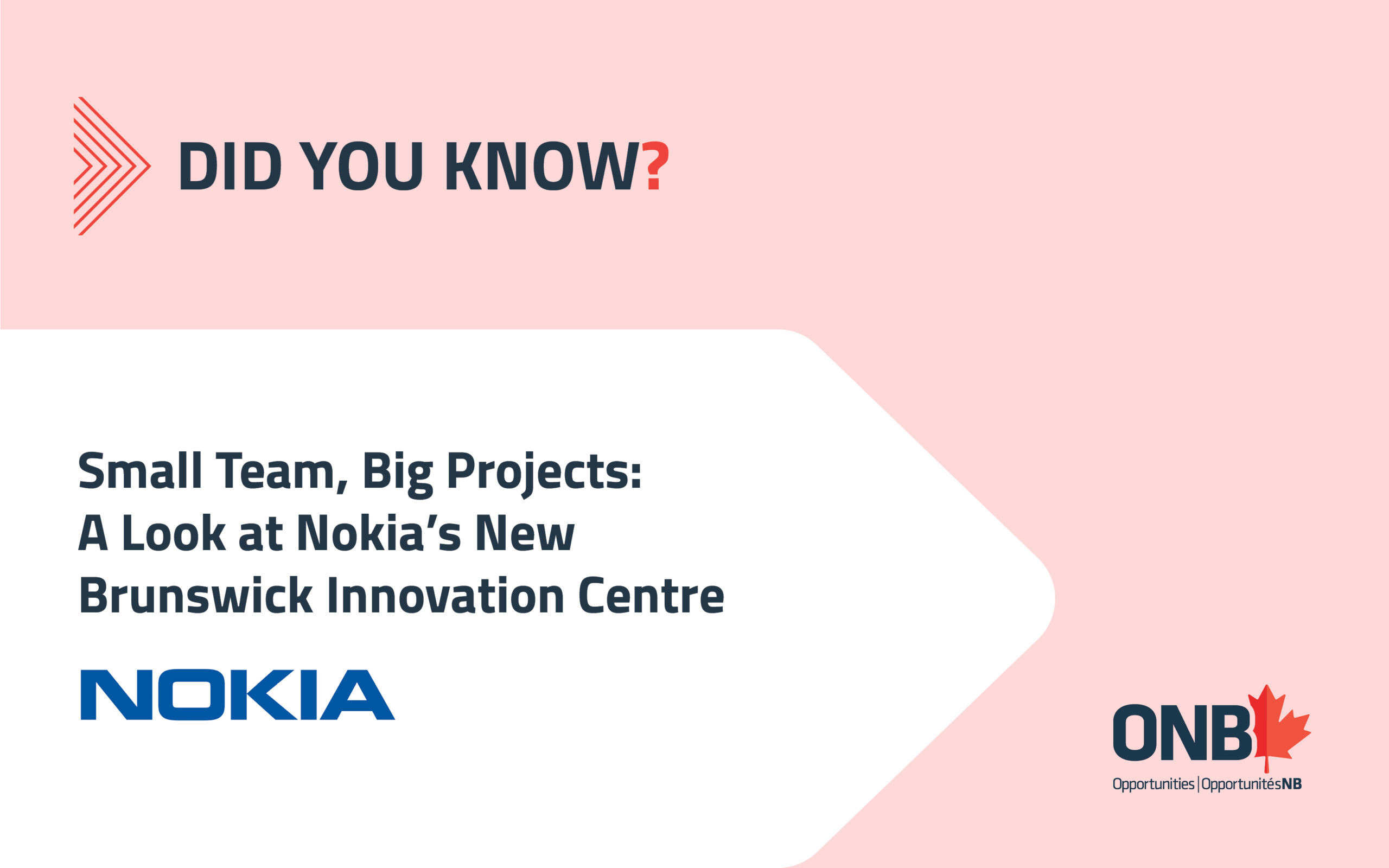 You no doubt recognize the name Nokia – one of the world’s oldest and largest multinational telecommunications companies. Many know of the Nokia 3310, the ultra-durable mobile phone turned internet meme.

What not everyone knows about, however, is the important New Brunswick connection – the Finnish tech giant operates an innovation centre in Rothesay supporting a host of well-known global brands.

“Our team is a bit of an odd duck. We sit outside other groups within the company, operating independently,” says Gino Dion, a native New Brunswicker and Head of Innovation Solutions within Nokia’s Fixed Networks team. “Our customers include business units within Nokia, as well as telecom companies like Bell and Rogers, and webscale partners like Apple, Google, Microsoft, and Amazon.”

Dion says his team provides these global clients with a rapid prototyping sandbox from which they can develop and test new, innovative ideas. “The reasoning behind the creation of this team was to provide Nokia with a way of working at the speed of those massive webscale partners. We’re still a small team, but we tackle large projects.”

He says while his team could have been established in Ottawa (at the company’s Canadian HQ) or another large urban centre in Ontario, New Brunswick made the most sense. “I’ve worked in the province’s tech sector since the 90s, I knew the skills we needed were here,” he says. “We needed people with experience working with a variety of technologies and that had a startup mentality. We have had so much success with tech startups in New Brunswick. You look at the acquisitions of iMagicTv, Radian6, and Q1 Labs, and the current tech startup scene and you see the talent is here.”

Dion’s team must approach every new project like it’s a startup idea. They aren’t building new products; they’re proving or disproving whether a new product or service is viable. “Our measure of success is not necessarily seeing something turn into a huge, commercially viable product, although it’s great when they do. There’s significant value in the work we do to demonstrate that something does or doesn’t work, because we can do it quickly and affordably. We’re an agent of positive friction.”

“We’re surrounded by amazing tech companies and tech leaders and mentors in New Brunswick. It’s a small world here and a tightly knit business community,” notes Dion. “There is so much opportunity and support here, with a ton of smart people willing to let you pick their brains. I don’t think we appreciate and tout that enough. There’s plenty of experience in New Brunswick, particularly in the telecom space. This was a big factor in establishing our team here.”

He notes that ONB has been a valuable partner as well, serving as a sounding board and connector. “ONB is in a unique position because they have the pulse on everything that’s going on in New Brunswick. We check in to let you know what we’re working on, and your team can come back with ‘here’s what else is happening in this space, or with this company, or this sector.’ It’s a great benefit to have that back and forth with a team that has a 360-degree view of the province, the networking and business intelligence aspect is so important.”

“We work on a wide spectrum of projects, everything from 5G mmWave, to ultra low latency gaming, to drone technology, to video analysis, and more. We get excited when we get to do something that helps Canada, and New Brunswick specifically,” says Dion. “If there are business leaders or entrepreneurs here that have a technology challenge or an idea for a new product or service, and want to know if Nokia can help, our team is happy to listen.”

He notes that while it’s a small team that won’t be able to help everyone, they are willing to try. “If we can’t help, we’ll share what we can from Nokia’s knowledge base, it’s a company of nearly 100,000 employees worldwide. Feel free to connect with me, and we can go from there.”